I have to say, I get some funny looks from people when I try to discuss the Raspberry Pi with those who are not familiar with it. I explain to them that it’s a computer, but it’s not quite as fast as the ones we usually use.  And well, it can’t quite handle all of the tasks we need it to. Your typical computer user likes social media, e-commerce, and writing office documents. That’s not the Pi.  It potentially could be used for some of that stuff, but that’s not why you want a Raspberry Pi.

I first got in to computers when I was twelve, just over twenty years ago. I got a paper route, and saved up my money for a year straight to buy myself a computer. Almost one thousand dollars later and a little help from my dad, I have a 386SX 16mhz beast with 2 megs of RAM and a 40MB hard drive. To me, that thing was awesome. And really, it was pretty good for the time.

Fast forward to now, and for $35 I ordered myself a Raspberry Pi. The change in technology over time really fascinates me. Let’s compare the difference here. The Raspberry Pi features an ARM processor which is designed to run at cooler temperatures than say a desktop PC, thus not needing a fan. However, the cycle time on the Pi can safely be overclocked to 1Ghz. That is 16mhz vs 1000mhz. It’s incredible.

I also jumped on the Pi train a little premature when the Model B’s were being shipped with 256MB of RAM. Once the developers saw the Pi catch on, they jumped the Model B standard issue up to 512MB RAM with no price change. They doubled the amount of memory and didn’t take it out on us, the consumer. When I bought my first PC, I remember some RAM factory in Japan blew up or whatnot and RAM was selling for something silly like $40 per MB. Today, a charity ate the cost of giving us an additional 256MB because they want us to enjoy their creation and experiment more.  It’s incredible.

I don’t really need to mention the standard on-board HDMI, two USB ports, ethernet jack, or SD card slot holder. These are peripherals that we just expect, or else our device won’t work the way we want it to. But these technologies make the graphics, storage space and speed, networking data transfer rates, and sound much better than any of the primitive technology I just mentioned. It’s expected, but it’s still incredible. 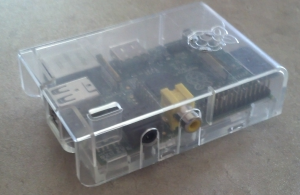 The Raspberry Pi isn’t really a single computer either, it’s as many computers as you want just by swapping out your SD card. For under $10, you can purchase an additional SD Card so you don’t have to interrupt the work you’ve already done. But now, you can try another Linux distribution or load some software you may want to tinker with, but not have hog resources on your primary card.

Parents have no need to worry about their kids messing up the computer while hacking.  One caution though I want to mention is opening a port for a server on your router and exposing the Raspberry Pi to the world.  You’ll be getting people all day long trying to get in. So while I’m thinking of it, change your “pi” account password if you haven’t yet.

Essentially what I want to stress is that for the cost of a cheap night out for dinner, we can expose ourselves and children to the wonderful world of tinkering. No need to worry about screwing up a system while we learn anymore.  With all of the open source projects and technologies, it’s time we move on from the “Microsoft Power Point” classroom courses, and actually learn something technical. We can learn how these systems work and not have to be a slave to customer support. It’s not for everyone, but it is for me, and you too if you read this far.  Join me on this journey, the sky is the limit.